James White has been reviewing William Lane Craig’s recent reviews of a podcast from last year. Sounds complicated, but stay with me.

WLC is reviewing the Sin Boldly Podcast that originally aired April, 2016. (Man. So much has happened in the world since then, but I digress). On that podcast, Sye Ten Bruggencate, who maintains the Proof That God Exists website, and apologist Eric Hernandez of Eric Hernandez Ministries, discussed apologetic methodology. Sye took the presuppositional position, Eric the classical approach. And, if you are interested, the original podcast can be found HERE on Youtube.

For an hour or so, both men clearly articulated their positions. I personally have always appreciated Sye’s work. While I may have minor quibbles with a few points in his presentation, he does a fantastic job outlining what I believe is the biblical way a Christian should defend the faith.

I was not familiar with Eric. He is well spoken, and seems to have a growing ministry. His presentation, on the other hand, aggravated me to the point of wanting to pull out my hair.  He brought together all the talking points I’ve come to love from classical apologists. The copious appeals to human philosophy. The intentional avoidance of biblical exegesis and theology. And of course, the annoyingly grating misuse of Scripture.

It is that grating misuse of Scripture I wish to address with this post.

Now if I may begin with a bit of broad-brushing.

I believe there is reason for this misuse of Scripture. As I have observed, classical apologists have an extremely low view of the Bible. That is especially true at the front end of their apologetic presentation. In fact, they have a bad tendency of intentionally avoiding the Bible all together. They insist that external evidence must be used to establish the viability of the Bible in the mind of the unbeliever first BEFORE they can appeal to it as an authority.

When philosophical constructs and logic-chopping arguments are the focus, Scripture invariably plays a secondary role. That regrettably causes bad exegetical habits to form, and the mishandling of Scripture springs forth from there.

Again, that is a broad-brush accusation. I obviously haven’t talked with every single individual who considers himself a classical apologist. I will readily admit there may be many classical apologists who handle the Scriptures quite well. That, however, has not been my experience, and I have discussed apologetic methodology with a number of them over the years on social media and in other venues.

Listen to the Sye and Eric exchange. Pretty much every passage Eric cites in supporting his classical approach is taken out of context. Just a cursory reading of the passages he cites reveal that the verses have nothing at all to do with apologetics or how we are to engage unbelief. I wrote down the main ones that were repeated a number of times and I wanted to briefly address four of them. 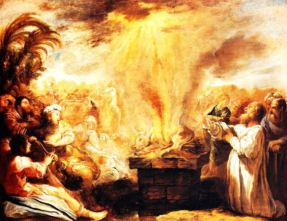 I have heard classical apologists appeal frequently to the story of Elijah defeating the false prophets of Baal on Mt. Carmel. They insist that when the unbelievers asked for evidence of God, God certainly gave it in the form of fire falling from heaven and consuming a sacrifice.

If we carefully read the account, however, Elijah confronts Ahab in 1 Kings 18:17. He rebukes him for leading Israel astray into idolatry. Elijah tells Ahab to gather all Israel (that would be the covenant people of Israel who already believe in God) and the 400 prophets of Baal that Jezebel supported.

They gather at Mt. Carmel and there God puts His character on spectacular display. His display, though, was not meant to prove Himself to unbelievers. He was showing Himself to Israel, especially Ahab. The showdown was a judgment against Jezebel’s false prophets, and a call to Israel for covenant faithfulness. It had nothing to do with proving God’s existence with evidence.

Isaiah’s words, “come now, and let us reason together,” are often quoted as a formula for engaging unbelievers reasonably. WLC even cites them in his review of Sye and Eric’s discussion when he is nit-picking at Sye’s comments. The idea classicists present is that God wants Christians to use their “reasoning.” The “us” reasoning together is understood as believers and unbelievers meeting together and discussing the truth claims of Christianity in a reasonable fashion.

That is not at all what Isaiah is saying. Rather, Isaiah’s opening chapter is a rebuke of the sins that Israel has accumulated as outlined from 1:1-17. God, speaking through Isaiah, calls His people to repentance. When they repent, He will wash their scarlet sins as white as snow, 1:18.

Isaiah’s point when he writes, “come let us reason together,” is that God will bless Israel if they repent and return to covenant obedience. His words have nothing to do with the apologetic methodology of reasoning with unbelievers.

Classical apologists are adamant that Paul’s message to the Athenian intelligentsia on Mar’s Hill models clearly the classical method of doing apologetics. Eric was no exception, citing the incident a few times in his discussion with Sye.

One of the reasons they believe Paul modeled classical apologetics has to do with his citation of two pagan Greek poets, Epimendes and Aratus. While those two men were speaking about pagan deities with their poems, Paul appeals to them as evidence for the true and living God that he proclaimed. In other words, Paul did not appeal to Scripture, nor start with the Bible, when he was talking with the Athenians. He used the poems of pagan poets.

We only have his summary message recorded for us, so we cannot be entirely certain what use of Scripture Paul made. He had spent a lot of time in the Synagogue speaking with the Jews and other worshipers who attended. He obviously had gained attention with his preaching because the philosophers took an interest in what he was teaching.

Paul, seizing upon the fact that Athens was a city given completely over to the pursuit of false religion, idols, and every philosophical whimsy, took the opportunity to preach on Mar’s Hill. He preached to the Athenians what they already knew to be true: that they know the true and living God, but they have substituted their idols and false religions for worship of Him.

Paul quotes two of their poets, not for the purpose of appealing to external evidence for building his case, but rather for exposing the folly of their philosophical worldview. He in essence is telling them, “look, you know the true God. Even your poets did. And yet, you all worship idols.”  He further explains how they will face judgment for their sin and calls them to come to Christ. Notice that he doesn’t attempt to prove to them the Resurrection of Jesus. Rather, he just proclaims it to them in 17:31. If anything, Paul’s sermon on Mar’s Hill is an exegetical application of Paul’s words in Romans chapter one.

First Corinthians 15 is one of the more important chapters of the NT.  It is Paul’s case for the Resurrection of Jesus Christ and the Christian believer. Every classical apologist appeals to the chapter as proof that Paul utilized external evidences to prove the historical reality of the Resurrection, particularly the use of eye-witness testimony.

But 1 Corinthians 15 is a passage that is misunderstood by many Christians regardless of their apologetic methodological persuasions. It is mistakenly believed that Paul is trying to prove the bodily resurrection of Jesus Christ to unbelievers in the Corinthian church. He is not.

Rather, he is correcting the Corinthian’s erroneous idea that Christians do not experience a physical resurrection. Verse 12 states, “Now, if Christ is preached, that He has been raised from the dead, how do some among you (the Corinthian church) say that there is no resurrection of the dead?” The Corinthians believed in Christ’s resurrection. Where they struggled was believing that a bodily resurrection happens for Christians.

There are probably other passages I may have missed. However, those are the key ones I often hear brought up when discussing the proper methodology for doing apologetics. While I believe it is vitally important that we anchor our methodology in the teaching of Scripture, it should be done not only exegetically, but also contextually. Misappropriating the Bible only undermines the entire apologetic enterprise.