The Gospel According to Tim Keller Part 3: The Marxist

Read parts one and two of this Tim Keller series – HERE

The two previous posts in this series examined the gospel according to Keller exposing that his teachings on the character and nature of Christ, the purpose of His death, His mission, and the mission of His church are in total contradiction to God’s word.

Every good Marxist knows that the greatest obstacle to their “utopian” fantasy has always been biblical truth.

As Karl Marx made clear:

“I wish to avenge myself against the One who rules above. The idea of God is the keynote of a perverted civilization; it must be destroyed. My object in life is to dethrone God and destroy capitalism.”  (The Communist Manifesto, 1848)

Subversion of biblical truth by means of infiltration is their goal.

Please note that it was “developed” by Roman Catholics, confirming by definition that it does not derive from scripture.

“Social equality for the Negro is a major slogan of the Communists. They use it on the one hand to mislead the Negro American, thereby exempting him from any sense of personal responsibility while on the other hand creating anxieties and fears among white Americans- they do this to better exploit both racial groups. The past was to be forgotten in the face of “a need for a common front against the white oppressors.” At the root of all racial unrest is the clammy, cold, bloody hand of Communism.”  Manning Johnson (Communist Party USA defector) from his book “Color, Communism and Common Sense”  1958 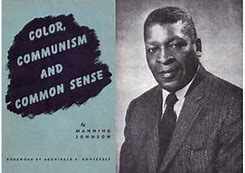 Mr. Manning continued his warnings when he testified before Congress in 1953 on the enormous success of the communist infiltration into American churches:

“Once the tactic of infiltrating religious organizations was set the actual mechanics of implementing the “new line” was a question of following the general experiences of the living church movement in Russia, where the Communists discovered that the destruction of religion could proceed much faster through infiltration of the church by Communist agents operating within the church itself. The Communist leadership in the United States realized that the infiltration tactic in this country would have to adapt itself to American conditions and the religious make-up peculiar to this country. In the earliest stages it was determined that with only small forces available it would be necessary to concentrate Communist agents in the seminaries and divinity schools. The practical conclusion drawn by the Red leaders was that these institutions would make it possible for a small Communist minority to influence the ideology of future clergymen. In general, the idea was to divert the emphasis of clerical thinking from the spiritual to the material and political—Instead of emphasis towards the spiritual and matters of the soul, the new and heavy emphasis was to deal with those matters which, in the main, led toward the Communist program of “immediate demands” [or “felt needs”].  This infiltration into seminaries was expedited by the use of considerable forces the Communists had in educational institutions which were eligible for hire by divinity organizations. The plan was to make the seminaries the neck of a funnel through which thousands of potential clergymen would issue forth, carrying with them, in varying degrees, an ideology: this policy was successful beyond even Communist expectations and was executed with great success among large elements of American church life. Communists operating a double-pronged infiltration, both through elements of Communist clergy and Communist laymen, managed to pervert and weaken entire strata of religious life in the United States. In the early 1930’s the Communists instructed thousands of their members to rejoin their ancestral religious groups and to operate in cells designed to infiltrate the churches.  The devil was sick—an angel he would be!”
Manning Johnson (Communist Party USA defector) excerpts from his testimony to The Committee on Un-American Activities – House of Representatives, 83rd Congress, First Session July 7 and 8, and July 13 and 14, 1953 http://www.crossroad.to/Quotes/communism/communism.htm  link to Congressional testimony excerpts

The infiltration and subversion of the visible church has been an enormous success due in part to the massive number of self-deceived false converts inside the church who have no concept of biblical truth.

Couple this with the ever-increasing number of Hebrews 5:12 Christians that show up every Sunday and there is simply no one to oppose the change agents, as they cannot discern good from evil. Some understand the ideology and are willing participants, but there are many more who fall into a slightly different category:

useful idiot:  a derogatory term for a person perceived as a propagandist for a cause of whose goals they are not fully aware and who because of their own ignorance can be cynically used by the leaders of the cause. The term was originally used to describe non-Communists regarded as susceptible to Communist propaganda and manipulation. The term has often been attributed to Communist dictator Vladimir Lenin.

Below is a link to a sermon at Keller’s Redeemer NYC campus illustrating his Marxist, social gospel that he claims is “especially” for the materially poor. It is a typical sermon for Keller but it sounds much more like a progressive, political stump speech. Keller’s misrepresentation and twisting of scripture is staggering in this sermon, as he tells us that “disadvantaged blacks and minorities join gangs, commit crimes, use drugs and prostitute their bodies because they have no choice.” Keller says “it’s the obvious response to being oppressed.” Nonsense. Scripture knows nothing of such a claim, but instead attributes any and all sinful behavior to a corrupt heart that naturally gravitates toward, and loves the darkness (Jer. 17:9, John 3:19). Note that the various links I have obtained online to this particular sermon have eventually been disabled, or made private several times by the Gospel for Life wing of Keller’s Redeemer Church network. As of this posting this is a live link.

This sermon had nothing to do with the gospel of Christ or man’s deeply depraved state in the sight of a Holy God. It is pure, Marxist ideology wrapped up nicely in a few horrendously distorted Bible verses. The term poor in many of the verses Keller cited is absolutely not a reference to our material condition, but instead our spiritual condition. He distorts verses that are a direct reference to man’s spiritual bankruptcy, hence the Bible’s oft repeated phrase “poor in spirit,” thereby, leaving his audience with a false understanding of the verse- and intentionally so, as it serves his false liberation theology.

“And there were some that had indignation within themselves, and said, Why was this waste of the ointment made?  For it might have been sold for more than three hundred pence, and have been given to the poor. And they murmured against her. And Jesus said, Let her alone; why do you criticize her? she hath wrought a good work on me.  For ye have the poor with you always, and whensoever ye will, ye may do them good: but me ye have not always.”   Mark 14:4-7

Please note the Lord’s clear statement that in a sinful, corrupt world there will always be poor people among us- and don’t miss His use of the term “ye will” with regard to helping those in need.

If it is not a voluntary act of the free will that derives from the heart (mercy and charity), it is not of God.  Tim Keller’s guilt-mongering and redistributive schemes to eradicate poverty in pursuit of Utopia are in total opposition to scripture. The apostles and the early church spent no time running around demanding social justice or obsessing over anyone’s economic status or material needs. That is not the mission. The mission was and is spiritual, not material.

“And the beggar gave heed unto them, expecting to receive something of them. Then Peter said, silver and gold have I none; but such as I have I give thee: “In the name of Jesus Christ of Nazareth rise up and walk.”  And he took him by the right hand, and lifted him up: and immediately his feet and ankle bones received strength. And he leaping up stood, and walked, and entered with them into the temple, walking, and leaping, and praising God.”   Acts 3:5-8

Keller’s Marxist ideology will be further examined in the next post (Pt 4). Until then, lay hold to the warning of a faithful voice from the past:

“Whatever account we may give, however, of the power of the world’s thought over Christian men, it seems pretty clear that the concessive attitude which leads men to accept the tenets which have originated elsewhere than in the Scriptures as the foundation of their thinking, and to bend Scripture into some sort of conciliation with them, is the ruling spirit of our time, which may, therefore, be said to be dominated by the very spirit of error in which a perversion of Christianity arises. In a time deeply marked by “concession,” at all levels, it is worth our while to remember on the one hand that concession is the high road to heresy.”

Written by Toni Brown – Check her website out – HERE